There were twenty-three members at the meeting and an excellent soup and sandwich lunch.

THERE IS STILL MORE BLANK CHINA FROM THE ESTATE SALE AVAILABLE AT THE MUSEUM. 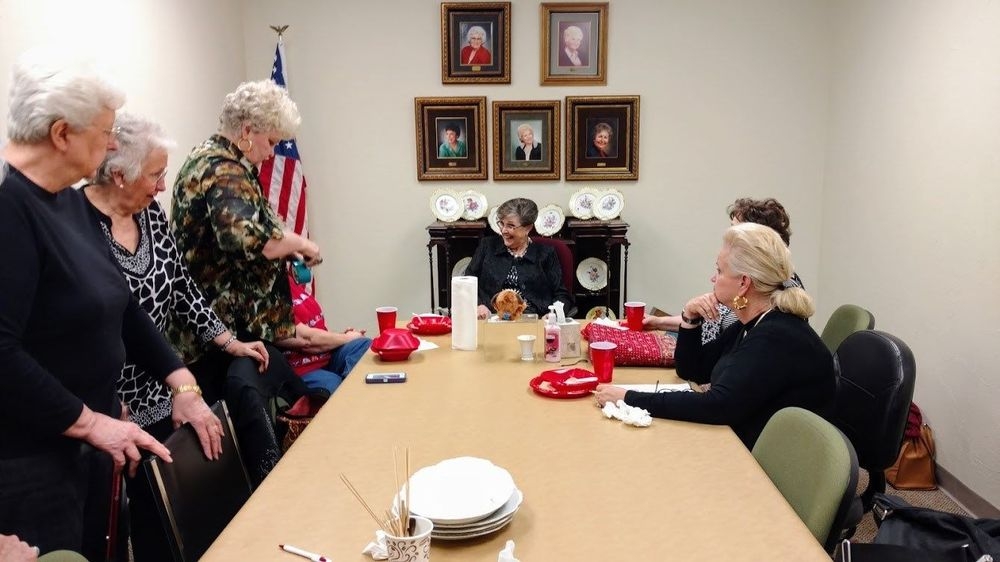 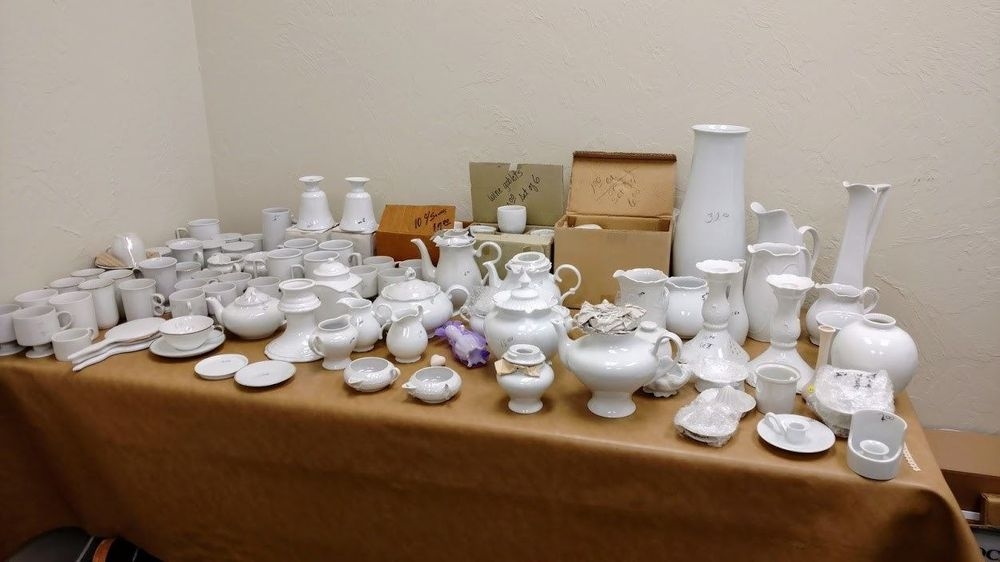 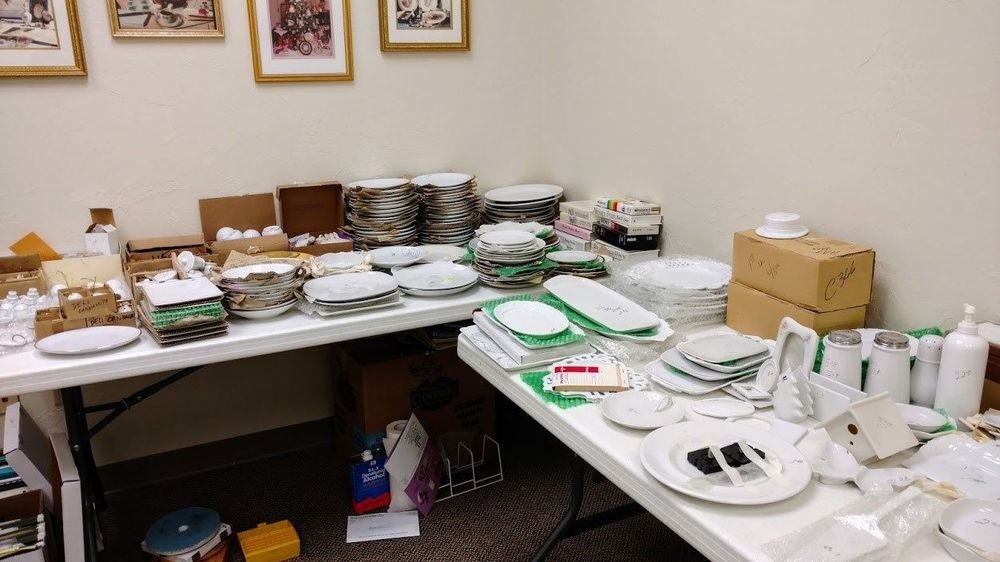 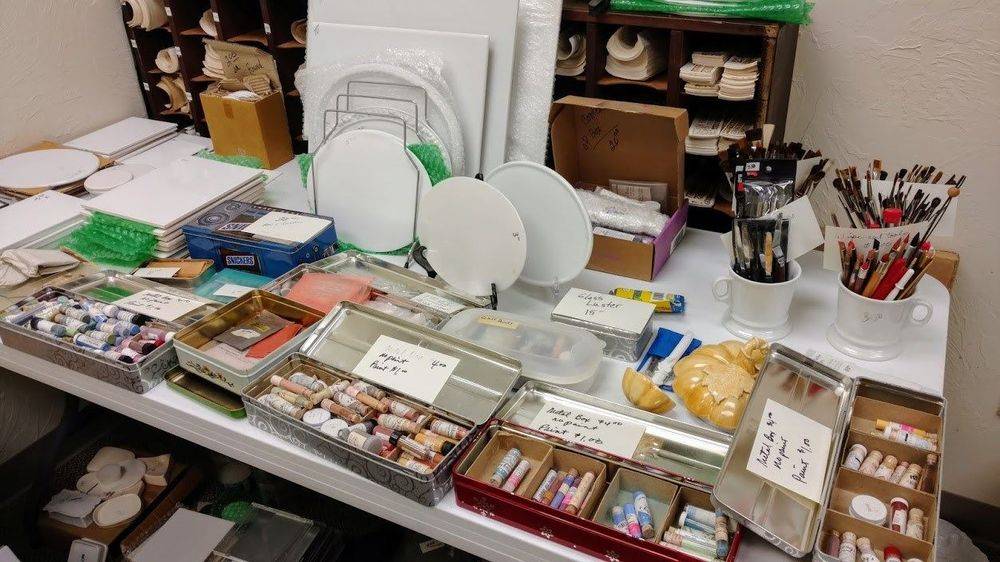 (Note: Board Meeting is on the 4th Saturday of January 2017)

Approval of Minutes from September 24, 2016 Meeting

If you are painting a vase for the Friday night tables, please bring them to Dorothy at this meeting.

Minutes to be approved at the January 2017 meeting. Please send any corrections to Thelma Ingram and Janet Crain by January 26

Meeting was called to order at 10:15 by President Thelma Ingram. Dorothy Anderson gave the invocation. There were 19 voting members present which constituted a quorum. We have 104 members this year and 51 voting members.

Secretary’s Report: Janet Crain read the minutes from April. There were several corrections to the minutes since emailed in June. The chair of the Event Committee is Dorothy Anderson. Kay Kernan will be chair of the Museum Ballet Committee since she was nominated first and all members are new on that committee. The state convention’s official name is Over the Hills and Through the Woods. After these corrections the minutes will be officially accepted and signed by Janet Crain and Thelma Ingram.

Treasurer’s Report: Sharan Amend gave a treasurer’s report. The OK WOCP education funds have $5938.57 and $4081.45 will be transferred to the educational fund.

Lois Higgins suggested a change to our Bylaws. Lois proposed Amendment to Standing Rule F and it was seconded by Shirley Weston.

Standing Rule F will now be revised to read as follows:

It passed unanimously after discussion.

Lois Higgins also had the 2016-2017 yearbooks for distribution and the board was very appreciative of her hard work. She asked that any corrections be emailed to her.

Ann Truscott reported for Fillis Newman that the Ok State Fair had 186 pieces entered, with 40 novice, 74 advanced and 72 open. Lois Higgins reported for Retha Faulkenberry that the Tulsa State Fair is just opening and there are 40 entries.

Dorothy Anderson gave report on our tri-state convention will be held March 20, 31, and April 1, 2017 in Springfield, Missouri, at the Ramada Plaza Hotel and Oasis Convention Center. Dorothy and several others had driven to Missouri and met with the Arkansas and Missouri convention committees. The convention is being held in a very nice hotel with much room for our displays and sales. The rooms are only $82 per night and there is free parking. There is also free airport shuttle if needed. She reported that San Do’s paint-in is already full and there are a few other spaces left in other classes. There was one area of the registration form that should read if you pay for the registration it includes the dinner.

The paint-ins will be on Thursday. The ballroom will not be open until Friday at 9 a.m. and will close at 2 p.m. Saturday afternoon for the sales booths and club tables. There is another convention at the hotel on Thursday so we cannot have the ballroom until Friday.

There are 19 positions for workers needed at registration and demonstrations. Please sign up to help.

There will be 4 themed painting competitions: portraits, flowers and fruit, bird and animals and special techniques. It is $5 to enter your piece and ½ will go for prize and ½ to the convention cost.

The board decided that Oklahoma would have tables for all the clubs to display their china. There will be no charge for the club tables at the convention as the hotel is not charging for these. The tables will be draped by the hotel.

Oklahoma is responsible for 15 painted vases for table decoration and prizes. Dorothy Anderson has already found china painters who have agreed to paint the vases. Missouri painters are furnishing their own vases a well as Paula White and Audelle Owen and Dorothy is delivering the other vases in the next month.

Bus or Van for convention: Beverly Armstrong reported that she had checked on buses to and from the convention but it was a minimum of $2000 so probably not affordable. She will continue to check on vans that could leave from Oklahoma City, stop in Tulsa and continue to Missouri. She will report on this in January.

Fundraisers for the Convention: Thelma Ingram is teaching a class on water lilies with lusters at the WOCP in January. There is one more opening. She is going to donate all the money to the OK WOCP.

Thelma Ingram has painted, decorated and donated small jars to sell. The small jars are $10 and the large jars $12. She also bought very nice ink pens that have the convention dates and details. She is selling these for $2. These will be for sale at the convention also.

W.O.C.P. Open House October 21-22: Thelma Ingram reported on the October 21-22 WOCP Museum Reception and Open House. Friday night there will be a reception from 5- 7 p.m. and an Open House on Saturday from 10 a.m. -4 p.m. The WOCP board will be meeting on Friday from 1 – 4:30. Bonnie Sharp has volunteered to decorate the tables and serve food and punch. Members and clubs are asked to bring finger foods for Friday night and cookies for Saturday and would like the cookies to be home made. We are planning on 50 guests on Friday and 200 guests for Saturday.

On Saturday there will be demonstrations and make and take projects. The board would appreciate help by all members.

Newletter: There is a WOCP newsletter emailed by Eloise Pino. Please email her if you would like to be included. Her email is [email protected]

Donation from OK WOCP to the WOCP: A motion was made by Adrian Mauch and seconded by Shirley Weston that the OK WOCP make a donation of up to $2000 to the WOCP for a new or used printer. Discussion followed. The printer being used is 16 years old. The money would come from our educational fund. After discussion the motion was unanimously approved.

We adjourned at noon for a sale of china from an estate, a lunch furnished by the Ok WOCP officers with a donation of $7, and China Bingo as a fundraiser.

The Reception will be Friday Evening October 21

The Open House will be all day Saturday, October 22