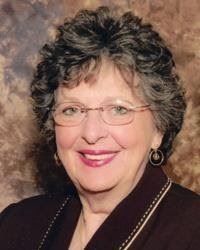 Margaret Joan "Joanie" Allen, 82, of Tulsa, passed away on Wednesday, July 18, 2018, after living a full and wonderful life.

Soon after graduating from Central High School, Joanie married her sweetheart Freddy. They started their family and she was a homemaker and mother. In the early 1960's she decided to go to beauty school and opened her own salon at her home which she ran while still handling three active children. Joanie was also a talented artist who enjoyed square dancing. She combined those two things when she started another business called Circle Left that provided beautiful hand painted square dance clothing and accessories.

Service will be held on Saturday, July 28, at 10:00 AM at Cremation Society of Oklahoma, 2103 East 3rd Street, Tulsa, OK 74104.In lieu of flowers, memorial contributions may be made to Miller Hospice, 6950 S. Utica Avenue, Tulsa, OK 74136. www.tulsacremation.comFor those who wish to donate to the World Organization of China Painters in Joanie Allen's memory mail to: World Organization of China Painters 2700 North Portland Avenue Oklahoma City, OK 73107Joanie Allen will be missed by all of us and it was a privileged to know and share porcelain painting with her.